Creating an online voting app advertisement. It is trying to target people who don't vote because they are too busy with work, college or University. This app is supposed to make the voting system much simpler.

My goal is to create an app advertisement for the app. The app allows users to vote online and read candidates’ platforms. It is also trying to grab attention for the people who don’t vote because they are either too busy or not interested in politics.

The challenge is to make it innovative so that it isn’t only an app advertisement. At the same time, it needs to grab attention from the viewers.

To grab attention from the viewers, I thought of empathizing with the target audience. Hopefully, they will feel more related to keep watching the video. Furthermore, I thought of an idea that could register faster to the app. On the voter information card, it could have a QR code and the user has to scan the QR code and it will register his personal information automatically.

I was asked to find a target and indicator from the Sustainable Development Goals in Interactive Design class. My classmate and I picked the goal number 16, in which it is about peace, justice, and strong institutions. The target was to develop effective, accountable, and transparent institutions at all levels. There is a lot of biased information about the candidates on the Internet so some of the new voters don’t really know which information is accurate. Hence, we want to create an app product that gives accurate information about the candidates. Furthermore, the app will have features for voting online anonymously and see the results. During our researches, we found out that the people who don’t vote are young adults because they are too busy with work, university, or college. Also, some people aren’t just interested in politics. So, we are going to try to target the ones who are too busy because we believe that it is important to vote. After the research, my classmate and I have to split up because we need to create our own prototype.

A semester later in Motion Graphics class, I learned a little bit about how to create UI animation and I had to pick one of our old projects. I picked the voting app that I did in Interactive Design class. It was only an intro so the criteria were to animate one flow of action.

On my 5th semester, we had to pick one of the older projects to improve it and add something that is innovative. Again, I picked the voting app because it was only an intro to UI animation. I had trouble with the easing so I want to fix that issue. Also, I want to create an app advertisement and add all the main features of the app.

I started to draw the storyboard for the app advertisement. It is basically showing step by step to accomplish the key features of the app. 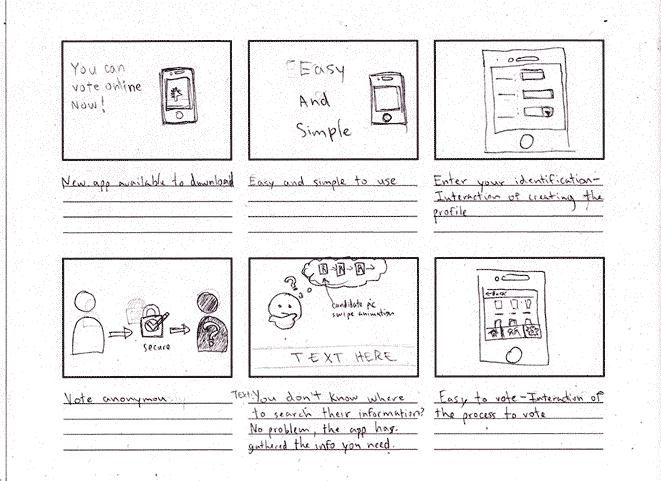 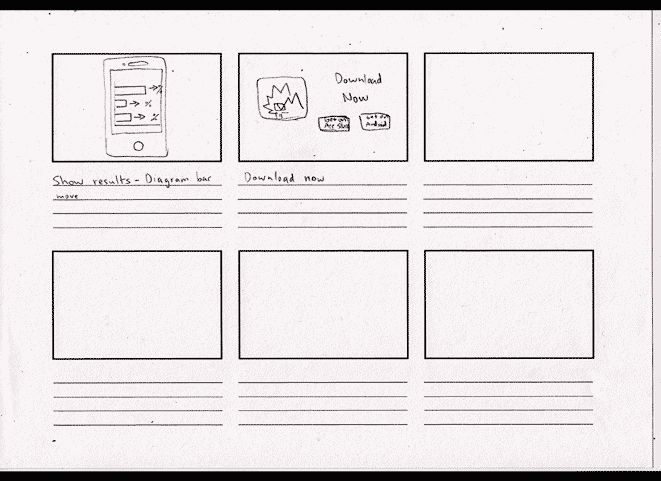 The next step is to add the voice-over. I used QuickTime to record my own voice.

After that, I need to include a story so that the target audience will feel related and grab their attention. I created directly my assets on Adobe Illustrator because it is only one frame. Once I finished the assets, I exported to After Effects. Afterward, I started putting keyframes and animate the video. I divided into 5 compositions because the voice-over had 5 parts.

I had a problem with easing the question mark. It moves too quickly and unnaturally. Also, the second image looks more transparent than the other images. I noticed the volume of my voice is too low so I need to increase it.

I used the graph editor to change the easing of the question mark to make it more natural. I just made the second image have different keyframes than the first and last one. In addition, I made the keyframes closer so it doesn’t show the transparency. I wasn't really sure how to increase the volume of my voice and I didn't want to record everything from scratch. Luckily, I found out that Adobe Premiere Pro can adjust the volume so I used that.